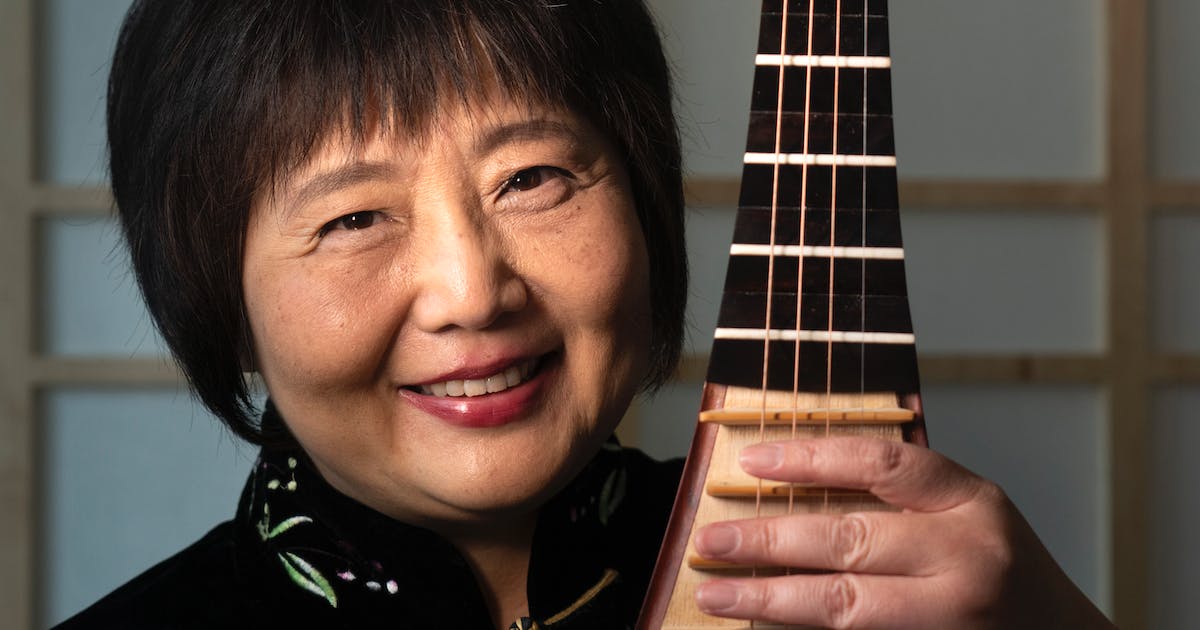 Her voice rises, her eyes brighten, her smile broadens.

Joy overtakes master musician Gao Hong whether she’s talking about teaching at Carleton College in Northfield, learning how to improvise or celebrating her 50th anniversary of playing the pipa, a most-challenging Chinese lute.

For her special anniversary concert on Sunday at the Ordway, Gao has booked an all-Minnesota musical lineup, including many collaborators from her early years here.

“April 3 is the exact 100 years birthday of my teacher,” she said, her face beaming with pride about the late Lin Shicheng. “Without my teacher, I wouldn’t be here. So I always thank him. This is a wonderful way to celebrate.

“I wanted this concert more like summarize of what I do as a performer — to pass on my teacher’s legacy.”

She has invited the Kenwood Symphony Orchestra (the first orchestra she played with in Minnesota 25 years ago), the Carleton College Chinese Music Ensemble (which she founded and directs), her former Carleton student Gus Holley (the only non-Chinese musician to win a gold medal in China), her multiculti group Speaking in Tongues (featuring musicians from Ghana, Mexico, China and Minnesota) as well as two Minnesota Orchestra musicians and a Carleton piano professor.

And then there’s one newcomer because Gao loves challenges — Dessa, the celebrated rapper/author/thinker. On Friday, the new collaborators will rehearse two Dessa selections with vocalist Aby Wolf.

“I’m very excited to take the stage with her [Gao],” Dessa said via e-mail. “She’s an incredible talent, with a madly impressive career arc, and a total mastery of her craft.”

“I refuse to pre-write it,” she explained. “When you improvise on the spot, the audience is part of your music-making. I want to connect with the audience with my heart.”

Sitting in her soundproof Carleton office/studio filled with Chinese instruments and posters from her gigs around the world, Gao is enthusiastic, respectful and grateful. She apologizes for her English (“I’m talking to you in Chinglish”), her highway driving (“I got pulled over many times but never get a ticket because they think I was too stupid”) and failing to offer her guest tea (she did offer concert tickets and CDs).

While Gao lights up when talking about improvising in Sunday’s concert, her first experience with improvisation was daunting. In 1997, just three years after moving to the States, she was performing at Walker Art Center with three local jazz musicians. She asked bassist Anthony Cox what they were playing and was told to do whatever she wants to.

“When it came time for my solo, I had no idea,” said the musician from improv-free conservatory training. “I kind of remembered what they played [so she played it]. Later my husband said: ‘I didn’t know you knew how to play blues.’ I said, ‘What is blues?’ “

She burst into laughter.

After her calligrapher father was blacklisted during Mao Zedong’s Cultural Revolution and her parents divorced, her music-teacher mother was concerned about Gao’s future. Music, not nursing, would be the answer for the youngster. At age 8, Gao quickly learned to play accordion, then a two-string guitar, a zither, a two-string violin and, finally, her mother’s choice for her, the most difficult of all Chinese instruments, the pipa (pronounced pee-pah), which has been around for at least 2,000 years.

At age 12, she was sent away to a conservatory, where she practiced eight hours a day, 10 hours daily on weekends. Bullied because her father was blacklisted, she felt she had to try twice as hard just to be equal.

“Very difficult life. I watched only two movies in six years; everyone [else] go to watch movies,” said Gao, told by her teacher that only 1% or 2% of the students continue to play the pipa. “People think I’m a little crazy. I’m a workaholic, but it make me happy.”

After 10 years at two acclaimed music schools, Gao became an accomplished pipa player who performed in China and Japan.

In 1992, she met Paul Dice, an American composer interested in Asian music, in Beijing and they romanced through interpreters. He booked a U.S. tour for her even though she’d never performed solo before, and they married (with interpreters) and moved to the Twin Cities, where Gao started teaching at MacPhail Center for Music.

Seven years later, she landed a job at Carleton and the family settled in Northfield, where they raised a daughter (who recently graduated from college in London, where she works as a film editor.)

In 2000, the Twin Cities-based Asian playhouse Theater Mu presented a play about Gao’s life, “Song of the Pipa,” named after a famous Chinese poem about an ancient, reclusive pipa player. She provided the music for all the performances.

During her 21 years at Carleton, Gao started two ensembles of student musicians and helped establish the only Chinese music major at a U.S. college.

She takes pride in many things, including her students, awards, grants and composing. “Hunting Eagles Catching Swans,” which she recorded with her teacher, Lin, in 1996 in Minneapolis, was rereleased in 2020 by Arc Music in the United Kingdom and garnered two gold medals at the 2020 Global Music Awards.

Gao has performed everywhere from Carnegie Hall in New York to the Festival d’Automne in Paris to orchestras from Argentina to Hawaii, with musicians from bluegrass to klezmer. She wrote the first pipa instruction book in English. And the longtime American citizen has performed “The Star-Spangled Banner” on pipa at three Timberwolves basketball games.

“I have the privilege to tour with him,” Gao said. “I’m the only student [to do that] other than his son.”

Teaching has become her calling, too.

“I’m passionate about teaching,” she gushed. “I love my students more than my performing, for sure.”

She becomes a second mother to her students at the small liberal arts campus, cooking Chinese food for them and listening to their personal problems.

“They call me Gao Mommy,” she said with an infectious laugh.

She hasn’t seen her 89-year-old mother and brother, an aerospace professor, in China for nearly three years.

When her mother called recently, Mom told her: “Tell them I’m dying. Why you can’t come.”

Gao finds comfort in her Carleton family. She is something of a rock star on campus.

“She is without a doubt the most high-profile performer we have in a school that is heavy on academics,” said pianist Nikki Melville, a longtime Carleton music professor and a member of the Twin Cities new-music ensemble Zeitgeist.

Beyond her work at Carleton, Gao has “become this symbol of cross-disciplinary, cross-cultural and cross-everything communication through music,” Melville said. “She’s opened up possibilities that people haven’t thought of. She is fearless. She doesn’t question her ability to find a way to communicate and work with this broad range of musicians.”

Melville said Gao is “humble and modest with boundless enthusiasm and energy. She’s just as happy going into a school somewhere and teaching little kids about Chinese music as she is playing with the Minnesota Orchestra.”

Gao just beams when she talks about Carleton, where she returned to classes this week after a scheduled sabbatical. During her semester away from the classroom, she composed music and gave performances and lectures on Zoom throughout the world.

Over the years, Gao has recorded nearly a dozen CDs. She’s especially proud of the last two, with Syrian oud player Issam Rafea.

“We never, never talk,” she said of her totally improvised performances and recordings with Rafea. “We can’t even say which mood or which key. Because I really want to listen from the heart. It’s more like a conversation. You say ‘Hello’ and I will answer you. I love that.”